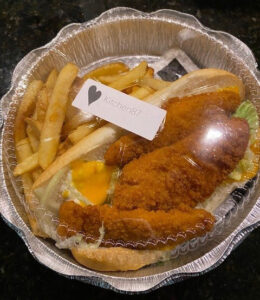 I love trying new restaurants for the first time. I have had Kitchen87 on my bucket list to try for a few years now. I have heard such good things about them, and everyone raves about their delicious English muffins, but they are a strict breakfast and lunch shop. So, when I began doing my Friday Fish Fry blog series, I knew I wanted to hit them up!

Another reason I wanted to try them during Lent is because they are a long-time advertiser for both Sacred Heart Church in Mt. Holly and Our Lady Queen of Peace in Hainesport. Many parishioners are seen there before and after mass. It is quite the local hangout!

The fried flounder sandwich was almost built to order. I was able to add a special touch to it – pick my own cheese! I had the sandwich with cheddar cheese! They also kept it simple with lettuce, tartar sauce and it was on a torpedo roll. It was accompanied by a side of French fries which were delicious!

Upon first bite, I could taste the difference that the flounder made. Usually when you have a fish sandwich it is cod, but Kitchen87 chose flounder. I applaud them on choosing a different fish, because it made all the difference in the taste. The roll was perfect, not chewy. It had the right amount of lettuce and tartar sauce as well.

Would I go back for another one this year?

Since Kitchen87 has a daily special, I may not have a chance to have their flounder Sammy again until next year! I am so happy I was able to devour it this year.

4.5/5 – this was a great sandwich. I only wish that it could have been spiced up a bit somehow. Perhaps a sriracha mayo or adding more than lettuce and cheese to the sandwich. I did give an extra half a point for allowing me to pick my own cheese though!