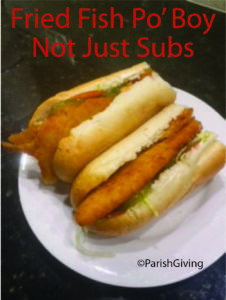 Not Just Subs is our local deli in town. The building was the old Lumberton Post Deli and I remember as a kid going there for their Italian subs on special occasions! Plus, their potato salad was legendary. The store sat vacant for about two decades until Not Just Subs bought it and fixed it up during the pandemic. Now we have a place in town for sandwiches again, and it is such a great feeling!

Now what I like most about Not Just Subs is that everything is fresh and made to order. I know that when I go in, they will take my order and prepare it exactly how I want it. So, when I ordered my fried fish po’ boy they asked if I minded hot sauce on it, and I said nope! So here we have my honest review of my Fried Fish Po’ Boy!

Upon examination, this is one beefy sandwich. There were two fried fish fillets on a French baguette. So far, so good. It had pickles, lettuce, tomato, and some type of Louisiana sauce that was delicious! The roll was 8-inches and had a nice crust, and fluffy inside. It was sturdy enough to hold the entire sandwich without any filling spilling out, and it did not get soggy! That is mostly because, although the fish was fried, it was not greasy. Win-win!

When I bit in, I did not have much spice, but it did have a nice flavor from the pickles! The fish was perfectly seasoned, so perhaps the Louisiana spice was in the crumbs when fried? Either way, it was good.

Would I go back again for another one this year?

Although I want to try as many different fish sandwiches during Lent as possible, I would definitely go back and order the fried fish po’ boy again during other times of the year. I would probably just ask for them to slice the sandwich in half, so I do not consume the whole thing in one sitting again.

4/5 – although it was really good, I was expecting a bit more spice.