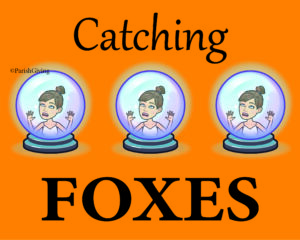 To be honest, I always listen to the intro episode just to see what the podcast will be about. I usually do not enjoy them all that much. Sometimes I do not even give the podcast a chance because they are so bad. Gomer and Luke’s intro episode was a bit different. They were up front and honest about themselves and it was a sense of relief. We know Gomer works for a Catholic church, but Luke keeps an air of mystery about his work life (very wise), they met at college and love their faith, but not in a preachy way. It’s official, I’m interested in listening to more.

If I am listening to a podcast that has been around for a bit, like Catching Foxes, I usually enjoy listening to the first episode and then jump to an episode a bit further down. It shows how much they have grown as interviewers and as podcasts. They usually become more comfortable with public speaking and editing. Hence that is what I did with this podcast.

The title of this episode really interested me because I have a background in literature. I always look for suggestions of books to read and thought a podcast would be a great way to discover new ones. The book they mentioned that really drew me is called The Power of Habit by Charles Duhigg. It teaches you the science of habits and how to break bad ones or create good ones. If you want to lose weight, or if you want to change a bad habit, this may be a good book for you to read. You can see if you have the grit and determination to fix it, or if you are okay with it. Either choice is fine.

So, I will admit and say that I was not familiar with Mrs Ruvi, but I can now see why she is an internet sensation! She is a twitch creator (she does lots of cooking shows!) and has started a nonprofit called the Good Egg fund through twitch to directly donate money to those in need. Twitch is similar to YouTube but is live and you can interact with the broadcaster.

Upon listening to this episode, it helps you see that there are still good people in the world. Her followers know that she is Catholic, but she does not preach it. Perhaps because of this she has loyal followers who want to help other followers. Some of her fans just ask for prayers for help, but others end up donating money because they are touched or inspired by their story. This is how her 501c3 came about. Her fans are incredibly generous, and she praises them for that.

I will admit that I was a bit hesitant when I started listening to this podcast, but I really enjoyed it! They are Catholic men in their 30’s, but it is not just a Catholic podcast. It is just two friends that you can laugh with and help you feel good about life. Definitely recommend!