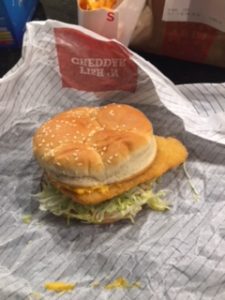 I did not intend for Arby’s to be my first fish sandwich of the year. I was hoping I’d be able to enjoy a nice, buttery Chick-fil-a fish sandwich. I walk into the restaurant and approach the cashier only to be told that they are not offering it at their location this year. Luckily Arby’s is next door and I just walked over and picked up a fish n cheddar with some curly fries (no tartar sauce). Well here goes nothing!

Wow! The fillet was huge! The ratio of bun to fish was not even by any means. The fish was just hanging off the bun and I almost needed and knife and fork to eat it. Lettuce was also falling off the bun, but I just turned it into a side salad instead! 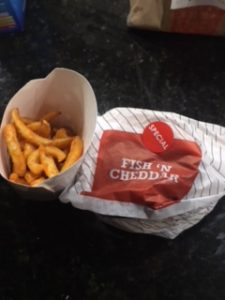 Okay, I was finally able to take a bite of the fish and the roll with the cheddar cheese. It was not as good as I remembered. I was expecting a nice piece of crispy fried fish on a golden bun, but it ended up being a piece of soggy fish with an equally soggy bun.

Would I go back again for another one this year?

No. I was actually quite disappointed because it was always my favorite fish sandwich during Lent. Perhaps it was the small bun, the soggy fish or the cheddar cheese was just not meant for the sandwich. Either way I’m going to pass if offered again.