It’s the Tuesday before Lent which means it is Mardi Gras! Mardi Gras translates to Fat Tuesday. It’s the day we use up all of the fatty, sugary foods 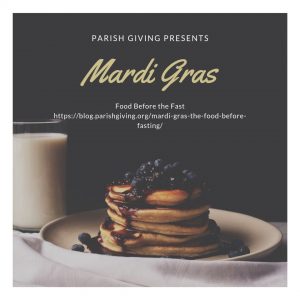 prior to the first day of Lent. For the next 40 days, we try our best to stay away from rich foods and to fast whenever possible. Different regions of the world have different ways to use up all of their fattening foods. Parish Giving wanted to share some of theirs!

This is Jill’s way to celebrate Fat Tuesday! It’s a Pennsylvania Dutch tradition which is a German word that means “Fasting Night”. What you are supposed to do is eat as much rich and delicious foods as you possibly can before the Lenten fast. Today we have Fastnacht donuts in which we enjoy. There are three different kinds:

-Fastnachts made with baking powder 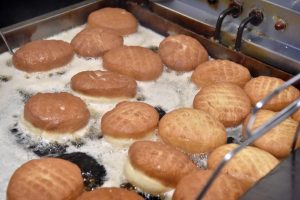 -Fastnachts with potato and yeast

No matter how you make these delicious donuts, they all contain butter or lard, flour, powder sugar and are deep fried. Some contain jelly or cream in the middle. Either way, they are delicious and melt in your mouth! You can see why Jill enjoys this tradition every year!

The traditional King Cake is usually eaten during Epiphany, but now is also seen during Mardi Gras! For Fat Tuesday, the cake is typically made of brioche colored with traditional Mardi Gras colors such as green, yellow and purple. The colors are seen in the cake and in the icing.

What makes King Cakes special is the figurine that is baked inside of it. The porcelain figurine represents Jesus, and the person who has him in their slice is responsible for next year’s cake! The lucky few who have the Jesus figurine can also be seen as the King or Queen of the party! I think I like that tradition better!

This is how I celebrate Fat Tuesday! For dinner, my family always celebrates with a big stack of pancakes, butter and plenty of maple syrup! We

usually have bacon or sausage with it too!

Shrove Tuesday is derived from Shrovetide, which is a biblical term for the last day of the liturgical season. The eating of pancakes on this day has dated back to the 16th Century for British Christians. Many churches still ring the Shriving Bell (Church bells) to sound when people should begin frying their pancakes.

We’d love to hear how you and your family celebrate Mardi Gras each year! Fat Tuesday has so many different traditions all around the world!