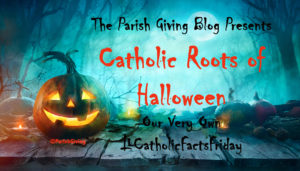 It’s always exciting when we discover a new parish or diocese to follow on Facebook, Instagram and Twitter. A couple of weeks ago I began to follow the Diocese of Syracuse on Twitter. They have a hashtag that they use called #CatholicFactsFriday. Some fun facts are that Michelangelo is the most famous and accomplished Catholic artist in history, or 15% of hospitals in the US are Catholic hospitals, or even that the Vatican is 108 acres. One #CatholicFactsFriday that made me stop and think was that Halloween has Catholic Roots. Needless to say, I did my homework and discovered that it is true!

It’s not the candy we expect to receive when trick-or-treating, but soul cakes were baked on All Hallows’ Eve and were taken door-to-door in barter for prayers of deceased family members. This is where the fundamentals of going door-to-door trick-or-treating came from. And cake does sound a lot better than candy!

We can link the tradition of dressing up on Halloween to the French. It appears during the 15th century they would dress up and dance around, or masquerade, and depict the paintings on the wall of people throughout their lifespan.

As people immigrated to the United States, they brought with them their Catholic traditions. When they married Catholics from other countries, they altered their rituals to make it their own. Therefore, we now dress up in costumes for Halloween, and why it is uniquely American!

It’s not autumn without a pumpkin carved into a Jack-o’-lantern! Originally a turnip was used in Celtic harvest festivals. American’s adopted this tradition but made it their own. Could you imagine autumn without pumpkins?! I know I can’t!

As you can see there are many Catholic roots to Halloween. American’s have taken different cultures from different countries and made the tradition their own. We can thank the Celts and the French for many of them! Hope you enjoyed our #CatholicFactsFriday!

We hope all of our readers have a happy and safe Halloween!