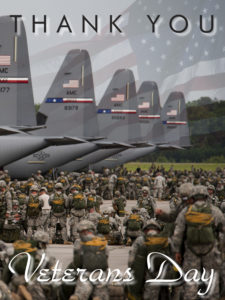 It’s hard to believe, but Monday is Veterans Day. The month of November is almost halfway done, and it seems as though we have so much to do before Christmas. However, we need to remember to thank those who have fought or are still fighting for our country. There are numerous ways we can observe Veterans Day – here are a few that we came up with!

Since Veterans Day is on a Monday this year, we can honor those who have fought for our country during mass. Church bulletins publish names of those who serve or have served, their country. Sometimes churches also have a part of mass in which they ask those who have served to stand up so the congregation can thank them. There are numerous ways to show appreciation during Mass; these are just a couple!

There are numerous parades you can attend on Veterans Day. One that is very well known is the New York City Veterans Day Parade which marches up 5th Avenue beginning at Madison Square Park to Rockefeller Plaza at 53rd Street.

Each year they feature a branch of the military and this year it is the US Marine Corp. They also have five Grand Marshall’s each from a different era dating from World War II up to post 9/11.

This year’s parade is extra special because it honors the 100th Anniversary of Armistice day, or the ending of the guns during World War I. This is also why we began honoring Veterans Day – to honor those who have fought during the World War.

Thank them for their service

Sometimes all Veterans want is a thank you for your service.

There are numerous ways in which you can honor Veterans this Monday. These are just a few. Next time you see someone wearing a uniform, or a military baseball cap, be sure to say thank you for your service. A thank you can go a long way.