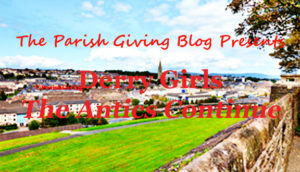 Derry Girls is anything but a one hit wonder. The first season is an original piece of art that can be compared to a masterpiece. Season two has not only lived up to the hype, but has surpassed many expectations. The quick-whit and escapades continue to make us laugh and wish there were more than six episodes in each season. Let’s see what trouble the girls and the wee English fella get into this season!

Still set in the mid-1990s, it is a time to bring the next generation closer together – that being Protestant and Catholic high school students. Erin and her friends are all set for the peace making, but are they all able to settle their differences? It’s funny to see both sides interact with one another and to see how their different beliefs affect the way they perceive one another!

Who doesn’t love a good wedding or a funny funeral? Well with Derry Girls this season you have both! We are now obsessed with the song Rock the Boat, and want to learn the dance routine from the wedding! To think our boring American weddings only have the YMCA! The funeral continued the hilarity from the wedding and makes us think twice about the words we use around family. Oh Ma Mary…

Just when you think you could not laugh any more, you see the gang attend an American style prom at school. The clothes, the music and the 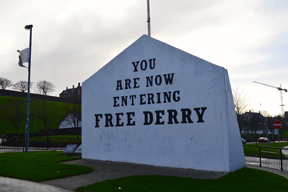 decorations in the gymnasium make you reminisce about your high school prom; then you remember you’re watching Derry Girls and some catastrophe has to happen.

The final scene of the last episode will certainly bring a tear to your eye. A moving speech by a former president, politics are changing, and a friend contemplates their future. Times they are changing and hopefully for the better.

There are many ups and downs during season 2; new characters, new challenges and new antics. As a viewer you can see that things in the small country are changing. Popular bands are showing up to play concerts, foreign dignitaries are making appearances and both sides are trying to make amends. You are learning while you laugh.

If your school decides to have a 1950s theme du wop prom, be sure to contact us at Parish Giving! We’d be able to set up a form for it and keep your organized during the entire event! We enjoy seeing all of the different events schools hold during the academic year!

It was released recently that there will be a third season of Derry Girls. Can’t wait to watch it!